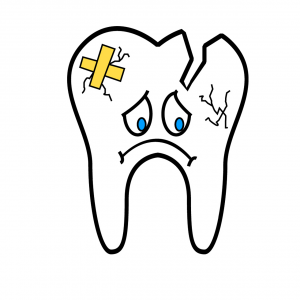 If teeth have to be extracted from the radiated field, we have to be very careful.

Osteoradionecrosis is an unfortunate side effect of radiotherapy for head and neck cancer, involving the non-healing of the jaw bone after radiotherapy.

These days it affects only about 3% of patients but before more targeted radiotherapy was introduced a couple of decades ago it affected more – maybe up to 11%.

It doesn’t mean that every stage of osteoradionecrosis means bone death caused by radiation but it does mean that the bone becomes weaker as it gets a poorer blood supply after radiation. This means that any trauma to the jaw bone is less likely to heal well. Dental extractions in the radiated field have to be avoided or carried out very carefully. It’s why we often have extractions before radiotherapy, a preemptive measure.

ORN can be spontaneous. Most ORN cases arise in  the back of the lower jaw or mandible.

Signs of ORN are pain, exposed bone, bits of bone breaking off. You can see more here: https://cancer.ca/en/treatments/side-effects/osteoradionecrosis

ORN is divided into stages as follows:

I:  ORN confined to alveolar bone (the ridge of bone containing the tooth sockets)

II: ORN limited to the alveolar bone and/or mandible above the level of the inferior alveolar canal (halfway down)

III: ORN involving the mandible below the level of the inferior alveolar canal and/or skin fistula (hole) and/or pathological fracture

Over the last decades there has been changing advice about how to prevent or deal with ORN. Previously HBO was used. Hyperbaric Oxygen Treatment where patients did “deep dives” in oxygen chambers like divers with the bends and that was thought to oxygenate the bone and improve blood flow. It was usually done before and after the extraction of a tooth. In the last decades studies have shown less benefit from HBO although I believe it is still used for some patients. Advocates for HBO stress that it works better once ORN has started  when combined with surgical techniques. The link below provides an in depth explanation and was found on the WDHB’s HBO unit’s page.

There have been various theories about why ORN develops. Earlier it was thought that it was caused by a lack of oxygen as above and hyperbaric oxygen treatment would help the bone heal. More recent researchers seem to think that the condition is caused by radiation induced scarring and a medical protocol called Pentaclo is being used by some ORL departments and specialist dentists.

In both cases it looks as if some surgical treatment is needed as well once ORN sets in: removal of dead bone – maybe even removal of the affected piece of jawbone and a fibula flap. These surgeries are often very successful.

(It is hard to sum up the information because there seems to be controversy and uncertainty about causes and treatments for this condition.)

Pentaclo consists of pentoxifylline, a drug that improves blood flow (also called Trental), alpha tocopherol or a type of Vitamin E which has an effect on the free radicals that proliferate because of radiotherapy. And  clodronate which is used to strengthen bones.

Here is an example of a Pentaclo protocol

The first treatment phase, lasting 4 to 6 weeks, was designed to reduce tissue infiltration and consisted of daily treatment with a combination of 2 g of amoxicillin-clavulanic acid, 1 g of ciprofloxacin, 50 mg of fluconazole, 20 mg of prednisone and 20 mg of omeprazole.

The second phase of PENTOCLO treatment was continued until complete healing with a daily dose of 800 mg of pentoxifylline, 1 g of tocopherol, 1600 mg of clodronate 5 days a week from Monday to Friday and 20 mg of prednisone 2 days a week, on Saturday and Sunday. This treatment was administered according to the protocol described by Delanian et al.

As can be seen above the patient has to be very compliant to stick to such a detailed regimen of drugs. It’s important for staff to write the regime down for patients.

All head and neck cancer patients who have radiotherapy are warned about ORN because it can be a result of a non-specialist dentist taking a tooth out in the radiation field. We have to check with the treating hospital first to see where the radiation was most concentrated.