Way back in 2007 I was told I had a field change round where the little tongue cancer was on the left side of my mouth. That means there had been subtle changes in the cells in that area which could lead to further primaries. And so it happened. I had big surgeries in 2009, 2014 anf 2021 which have left me with some mild speech abnormalities, hardly any teeth and the inability to eat solid food. Scars galore too.

In 2014 the team tried radiotherapy to “stop the cancers coming back on that side”.

It worked for 7 1/2 years but in October this year I felt a new pain – a distinctive localised pain on the left side of my throat. It was quite a big tumour, about 2 centimetres –  between the vocal chords and the tonsil and what ensued was major surgery, my worst yet, to remove it.

I was impressed by the work up: a CT scan, a PET scan, a scope under anaesthetic. Looked as if there was something on my liver but it turned out to be harmless. There were two nodes on the RIGHT side shining but they two were innocent.

I was surprisingly calm, reassured that a planned dental procedure was going to go ahead at the same time as the cancer removal op. I was happy that the anaesthetist had found a workaround for the awake intubation I had been through in the past – a horrible procedure. But I was sort of “wrong” to be calm. The op was huge and I suffered horribly in the first week with plenty more suffering in the week or 2 after that. I don’t mean pain. I mean gross discomfort, terrible thirst and a horrible feeling in my head. The staff were great but I am a restless, uncomfortable patient, not tending to just doze through it; lying there with an overactive mind.

My eldest son was wonderful but I allowed him only short visits because it’s so hard to talk to someone when you feel the way I did. I am so proud of him though. He has a demanding job and he and his wife were selling their Browns Bay unit and buying a bigger house for their family. In such a stressful time he made getting me well a priority. There was one advantage to Covid. He was working from home and could actually work anywhere on his laptop or phone. This made shepherding me through hospital admission and discharge and taking me to appointments much easier.

Apparently they had trouble getting my pain under control after the surgery but I don’t remember that so to me it was inconsequential. I seemed to wake up to an ICU room with a beautiful nurse called Princess who worked on a huge screen and had some colleagues  who filled in for her when she took breaks. They were two wonderful Korean nurses with purple hair and great senses of humour. It was almost fun in ICU but soon I was off to the ward and from past experience, that is when all the good effects of the drugs wear off and I feel as if I have been hit by a bus.

I wasn’t too bad in the ward at first but I was in a four bed room where one person who seemed very sick had a lot of visitors – something I didn’t think was allowed under Covid. There was a lot of unpleasantness and it was a relief when some excited nurses came in and said there was a single room free.

The room was great but from then on I remember lots of discomfort. I still had a central line in my groin and lots of drains and tubes. I was mentally restless and must have tried to get out of bed without due consideration for all these things. The consequence was needing a watcher for the next few days. No more need be said but I found it terrible and humiliating.  I couldn’t use my phone yet as my mind was scrambled, couldn’t read but gradually things were removed: a drain here, the central line out and for pain relief I was off the pain pump and on Oxynorm which made a huge difference to my comfort and mentality. Didn’t last long but by the time I started it I was already picking up and was able to use my phone and read a book.

Eventually nurses flushed my meds with more water and the terrible thirst subsided. I improved a lot according to my son who noticed changes every day. However a deep seated discomfort remained with me – something I have had on the two previous occasions and seems to be associated with being in hospital. A sore back, a sore left buttock, an inability to get comfortable, some mental distress. On previous occasions this deep overall discomfort had disappeared when I went home so I pushed hard to do just that.

The transition off the tracheostomy went well and eventually I was left with one drain. My flap was taken from my right thigh and it took its time draining. After two weeks it hadn’t stopped and I pushed to go home with it. When I got home I was disappointed to find that I still felt the “hospital discomfort”. This went on for about four days during which time I went for a walk that was comfortable but probably too long and something just wasn’t quite right with the drain anyway. Long story. It transpired that I had developed an infection inside the thigh which resulted in a return to hospital and IV antibiotics for a couple of days. A very painful thigh too! All made worse by the fact that I blamed myself for drain coming loose and water getting in.

The staff were great though. Two wound experts drained out the wound manually and with suction (I think) while another held my hand. Don’t tell them but it didn’t really hurt at all. By that time I was just so grateful for the TLC.

All of the above held me up a lot BUT when I got home this time the “hospital discomfort” disappeared quite soon. Interesting.

One awful aspect of my time in hospital is that I “failed” a couple of swallowing tests which were carried out by x-ray. The thigh flap was bulky.  Would this throat be able to swallow? I was reassured that this was temporary but it was still scary. Fortunately I progressed from sipping tiny amounts of water to puree, to (after I got home) drinking my Fortisip. Now I can drink coffee, smoothies, soups, purees with ease but I’m not sure how safe my swallow is for things like pills. I’m a bit sick of using my mighty pill crusher. All in good time.

I didn’t really enjoy the district nurses coming because I live in an apartment with tricky access for them. It was such a relief when I decided I could drive again and went to them in the nearby WDHB centre in Whangaparaoa Rd. I saw the dietitian there too who pulled my NG tube out beautifully. “It’s long she said. You’re a tall lady.”

This is not the end of my story but it’s the end of the middle. I haven’t had my follow up yet and I know I have some risky dysplasia near the margins which will have to be watched. My aim was to get through the surgery and worry about the cancer later. I’ve done that and it is such a relief to feel comfortable in my body again. 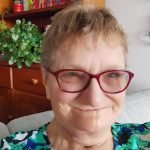